I am a woman that has very dark hair.

I also have a blonde mother, and when I was growing up she was on the local news. She always looked glamorous and had more than her fair share of admirers/imitators. I’m sure those early images of her ultra-light hair is the root-cause, I’ve always harbored a deep, dark desire to be a blonde. 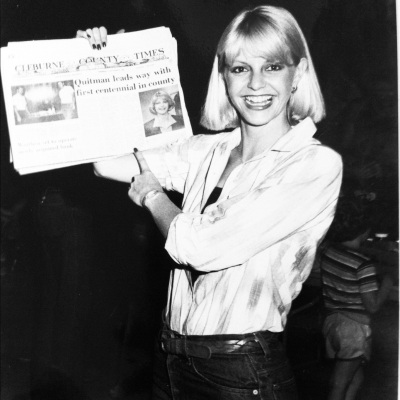 A lot of women fall into the not blonde/ not brunette range and they can flip and flop between. For those of us with the darkest locks, it’s mostly more of a pipe dream (due to cost, upkeep or finding a stylist that can do it). While I know that my hair and my wallet do not want me to turn to bleach, I still really really want to but have never really come close. I’ve had the occasional highlight, which has gone awry more than once. And I’ve gone darker, to give myself the illusion of a “change”. I’ve told myself that one day I’ll chop the whole thing off and dye it blonde, which would be considerably easier on my mane but in the back of my mind, I know it’s not true. It’s just not meant to be…

Enter Erika Bearman aka @oscarprgirl (above). She is the PR exec for Oscar de la Renta and an enviable force in social media. I keep up with her via twitter or instagram to see what she’s wearing and admire her for being a woman in a high-power/ high-influence role. It doesn’t hurt that she’s charming and visually lovely. Like me, she often expressed an ambition to become a blonde. I sighed along with her while perusing editorials and street style snaps of honey to champagne-shaded tresses.

Suddenly, earlier this week, she announced her intent. OscarPRGirl would be a blonde. I became excited and anxious to see the results. But also – I felt nervous for her and the finality of all that bleach, like only a fellow brunette would. Luckily, she took vogue.com (natch) along for the ride to document the lengthy (12.5 hour) process. I’m looking forward to seeing what she does with the wildly transformed hair color. I know she will rock it and ultimately help all of the lonely brunettes out there to decide whether or not to take the plunge. Full story here.

One thought on “Going Platinum”

I don't believe we should ever stop playing dress-up.
On The Window Shopper, you'll find me posting outfit inspiration on the regular.